Julian Pierce devoted his life to advocating social change and fought tirelessly for justice and equality for all people. Pierce would often credit his success as a civil rights attorney, scholar, activist and accomplished scientist to a solid educational foundation. Thirty-five years after his death, those efforts continue to impact the community through scholarships at UNC Pembroke, Robeson Community College, and North Carolina Central University.

Recently, the Julian Pierce Memorial Initiative Committee members presented a $25,000 contribution to UNCP to support the scholarship named in his honor. More than $80,000 was raised at the ninth annual memorial art dinner and auction over the summer.

“The ability to give back to students in our community is a blessing,” said Pierce’s daughter, Julia in a press release. Juliao serves as associate general counsel with the U.S. Department of Health and Human Services. “One of my father's primary goals was to use the judicial system, the education system and opportunities for volunteer service to raise people out of poverty.”

Chancellor Robin Gary Cummings, who spoke at the dinner, said the event continues Julian’s mission to better the lives of others.

“We’re grateful for this growing scholarship that has helped so many students, and more to come, as they pursue their educational goals and dreams,” Cummings said in a press release.

Pierce, a 1966 graduate of UNCP, was the founding director of Lumbee River Legal Services, where he helped low-income people gain access to health and legal services. He was instrumental in merging Robeson County’s school systems and helped build the Robeson County Health Care Corporation.

In 1988, Pierce was murdered while running for election to the Superior Court. He would have been the first American Indian to hold the Superior Court judge position in North Carolina. Pierce won the election posthumously by more than 2,000 votes.

Former Lumbee Tribal Chairman Harvey Godwin––who, along with his son, Cody, organized the first art dinner––is grateful for the support from the community, the university and countless volunteers.

“This is a collaborative effort by so many who volunteer their time to organize the dinner and bring the artists together who contribute their artwork,” said Godwin in a press release. Godwin served as Pierce’s campaign manager.

Rebekah Lowry, director of Alumni Affairs at UNCP, said she is grateful for Godwin's vision and foresight to create a committee that integrates the leading higher education institutions in the region.

"Creating pathways for students to be successful in higher education by providing financial assistance through scholarship opportunities is our responsibility,” said Dr. Lowry in a press release. “I am committed to 'keeping the vision' in honor of Julian, his legacy, his family, our community and beyond.”

To learn more about the Pierce scholarship at UNCP, contact the Office of Advancement at 910-521-6252 or advancement@uncp.edu. 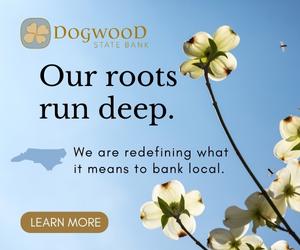